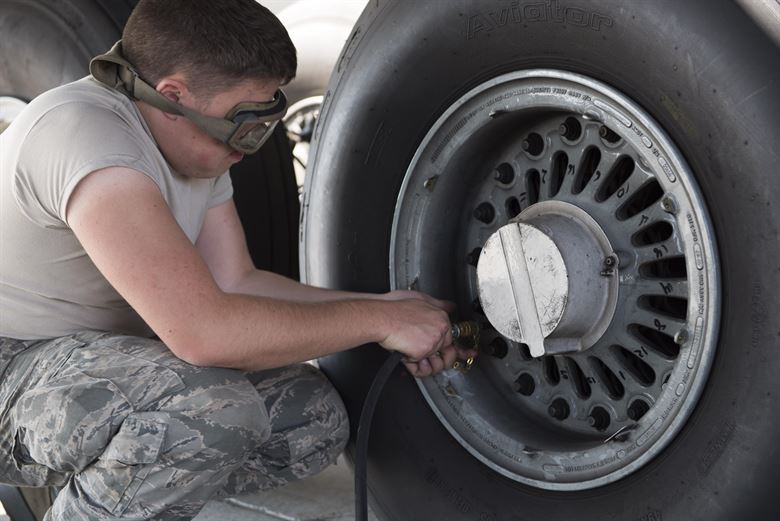 It’s common sense that tires are integral to a vehicle’s performance, but many drivers may not be aware of the importance of their tires’ inflation pressure.  After all, it’s not the tires that support the weight of the vehicle but, rather, the pressurized gas inside them. And the air pressure must be right.  If the pressure is too high, less of the tire touches the ground, causing reduced traction and an impaired ability to stop quickly.  If the pressure is too low, then too much of the tires’ surface comes in contact with the road, increasing friction, which not only causes the tires to wear more quickly but also increases the chance of overheating.  Overheating can cause tread separation, likely leading to a serious accident.

Many tires on the road today are filled with compressed air, which fluctuates in pressure regularly.  You might remember from high school physics that there is a direct relationship between temperature and pressure.  When heated, air molecules move rapidly, increasing pressure. When cooled, air molecules move slowly, thereby contracting and reducing pressure.  In fact, when filled with compressed air, tire pressure varies by one psi (pound per square inch) for every 10°F.

In North America, the average difference between a typical summer day and a typical winter day is about 50°F.  That’s a 5 psi fluctuation tires endure between seasons. In North America, the average difference between the coldest time of any given day and the hottest time of that day is about 20°F, and potentially more if the vehicle is in direct sunlight.  However, this is the average, and more significant temperature changes are often experienced all around the United States.

It’s recommended that tire pressure is checked at least once a month.  However, considering the temperature statistics, once a month might not be often enough to prevent a catastrophe.  There is an incredibly simple solution though. Filling tires with nitrogen instead of compressed air could offer a huge sense of relief.  Nitrogen doesn’t expand and contract in response to temperature changes the way air does, so tire pressure can be effortlessly maintained without unnecessarily checking it every hour of the day.  Racecars and aircraft aren’t the only vehicles that can benefit from nitrogen inertion—the average driver can focus on the road without worrying about tire complications simply by choosing to fill their tires with nitrogen.