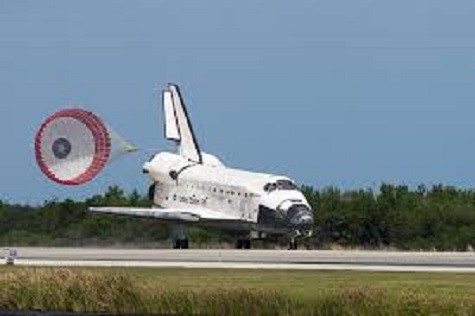 In the 1960s and 1970s, NASA launched dozens of rockets that sent astronauts into space and even successfully landed on the moon. But while the bold Apollo space program reached uncharted territory in space, it wasn’t until the 1980s that NASA had to face a completely different challenge: tires.

The rockets used by NASA before the 1980s didn’t have tires––instead, the Saturn V rocket, which stood as tall as a 36-story building, blasted off from a launch pad. But with the development of the space shuttle, which launched for the first time in 1981, NASA had to rely on tires for the first time.

After rigorous testing, NASA’s solution was a safe, durable tire inerted with nitrogen. Nitrogen, an inert gas, is much more stable than regular air. That meant the space shuttle tires could go from negative 40 degrees Fahrenheit in space to over 130 degrees Fahrenheit on landing in just minutes––without cracking or breaking, which could endanger the entire mission.

Every tire on the NASA space shuttle served an important role in keeping astronauts safe and protecting the valuable scientific materials on the shuttle. And though they are incredibly strong, NASA space shuttle tires are not much larger than a regular truck tire.

For voyages into space and back, only tires inerted with nitrogen could pass NASA’s rigorous tests. Your travels may not take you quite so far, or through such daunting conditions. But nitrogen-inerted tires can help you stay safe, too.