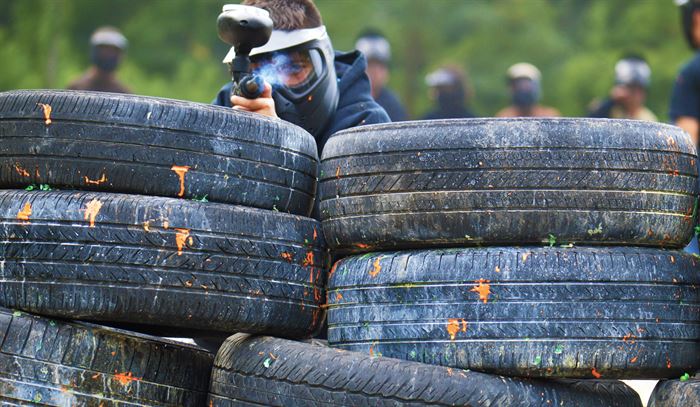 Today, paintball is a popular hobby, with more than 3 million people playing paintball each year. But originally, paintball was never supposed to be a game at all. So how did paintball become a major hobby?

It wasn’t until 1981 that a group of friends realized the Nel-Spot pistol could be used for more than tagging trees. On June 7, 1981, twelve players participated in history’s first paintball game, held in the woods of New Hampshire. They called it “The Survival Game.”

The game involved collecting colored flags placed across 80 acres of woods without getting shot. Some players opted to take out as many opponents as possible, while others simply ran for the flags. The winner, Ritchie White, reportedly never fired a shot and none of the other players spotted him during the game. White’s background as a forester gave him a major stealth advantage.

It didn’t take long for others to hear about the new game. By the end of 1981, Sports Illustrated and Time Magazine both published articles about paintball, and by 1983 the first championship games occurred, with a team from Ontario, Canada taking home the top prize.

While the original paintball guns relied on carbon dioxide, by the 1990s players introduced a new gas with a major advantage: nitrogen-rich, high-pressure air. One designer introduced a nitrogen regulator in 1991, and since then many have switched to nitrogen. Most players prefer nitrogen, which doesn’t liquefy under high pressure and isn’t cold like carbon dioxide. It’s better for play, since carbon dioxide can freeze up in the middle of a game, and nitrogen is safer for the paintball gun, too. The cold temperatures associated with carbon dioxide can crack the guns.

Just like the paintball player debate over carbon dioxide or nitrogen, many drivers are switching from filling their tires with regular air to nitrogen. Unlike regular air, nitrogen prevents oxidation and water vapor, which can damage tires. And nitrogen minimizes pressure fluctuations because of temperature changes.

In the paintball world, some still choose carbon dioxide because it’s cheaper, even though it can damage the paintball gun and freeze up during play. But in the world of car tires, more and more people are switching to nitrogen inertion.