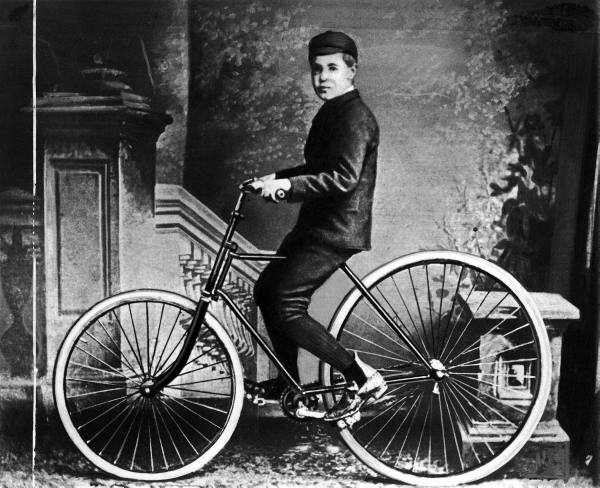 Today, most of us take for granted the smooth ride provided by the modern pneumatic tire.  (A pneumatic tire is made of reinforced rubber and filled with gas, typically compressed air.)  But how did this useful tire come into existence?

Early wheels were solid pieces of wood.  Eventually, leather was added to the exterior to make a more comfortable ride.  This was the end of tire advancement for thousands of years until rubber entered the scene.  However, early rubber was sticky and glue-like in the heat and became inflexible and bone-hard in cold weather.  In 1834, Charles Goodyear became obsessed with perfecting this confounding substance, and he spent the next five years tirelessly experimenting on rubber.

All his experiments failed horribly until he tried adding sulphur and heated the mixture to produce the first weatherproof rubber.  The process, which became known as vulcanization, produced the firm, pliable rubber with which we are familiar today.  Forty years later, a rubber company named their new tire company after him in commemoration.

The next generation of tires were made of solid rubber, but they were extremely heavy and provided a bumpy ride.  In 1845, Robert W. Thomson patented the air-filled tire, which greatly reduced vibration and improved traction.  Despite his genius, his idea was ahead of its time.  Rubber was too expensive for the tire to be profitable, and the pneumatic tire was forgotten.

The growing popularity of bicycles later in the 19th century sparked new interest in tire design and in 1888, John Boyd Dunlop obtained patents for the pneumatic tire, claiming to have never heard of Thomson’s invention.  Dunlop’s timing was perfect.  This air-filled tire was much lighter, offering a better ride for the newly popular bicycles.

For the next 50 years, tires consisted of an inner tube filled with compressed air surrounded by an outer casing that protected it and provided traction.  These bias ply tires were so named because the plies reinforcing the outer casing were made of cords that ran crisscross to each other.

In 1948, the first steel-belted radial tires were introduced in Europe.  The ply cords in these tires radiate at a 90° angle from the wheel rim, and most importantly, the outer casing is additionally strengthened by a belt of fabric steel.

While representing a vast improvement over tires of yesteryear, most pneumatic tires have a major drawback—they’re filled with compressed air which contains moisture and contaminants.  The moisture, combined with oxygen, accelerates oxidation processes which make the rubber brittle and cause metal parts to rust. Compressed air permeates the rubber of the tire, resulting in gradual but constant loss of inflation pressure; and it expands when heated and contracts when cooled.  This leads to pressure fluctuations, which significantly affect vehicle handling, safety, and fuel economy.

All these issues are addressed by the latest technological advancement: inerting the tire with nitrogen instead of inflating with air.  Nitrogen is dry, so there is no moisture to cause corrosion.  Its pressure doesn’t fluctuate with temperature change, and due to its larger molecular size, it permeates the rubber more slowly than compressed air.  Inerting tires with nitrogen is the latest development in the evolution of the tire, and when all its benefits are contemplated, it’s truly amazing what human beings are able to contrive.